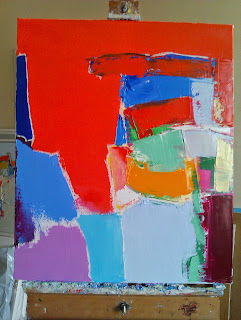 When I called into the studio yesterday I became re-acquainted with this canvas after a break of several weeks and I could see what I needed to do next.  But I was meeting up with a very old friend and the thought of whiling away the time over lunch and a bottle of wine was far too good to resist. It was the best decision by far because by the end of the afternoon I was in such good spirits that I felt re-energised and tackling this painting over the next couple of weeks will be a cinch!
Posted by Mary Jolley née Peckham No comments: Links to this post

When I'm not painting I am thinking about painting. I have discovered iPlayer archives where I can watch John Hoyland working and talking about his work in 1978 and Paule Vezelay being filmed in 1984. It's totally absorbing but lurking in the back of my mind is the notion that I am doing this to escape the studio and the painting which sits unfinished on the easel. I am dodging work because it's hard going. I wouldn't presume to set myself alongside Hoyland but I am reassured to hear him express feelings which resonate with me. He describes it as a "nerve wracking business". "It's just you on your own in a room ... just making a painting seems such a ridiculous activity in a way ...      ... you don't know if you can do it...."