The one thing about waiting for your body to recover from a virus is that it gives you the time to go on-line and look up the things that interest you. Today in a nostalgic mood I trawled through references to Pontypool. Some sad (I discovered that my old school closed some years ago), some sentimental (a photograph of the bridge by the canal where my sons would fish for frogspawn) and then what I was really looking for - Japan Ware for which Pontypool was known.
The black, beautifully decorated and highly lacqued trays and plates that I have seen are exotic and oddly out of place in a small South Wales valley where the main industries were coal and iron. It's the clever use of these resources that is so inspirational. By rolling the iron into thin sheets it could be moulded into objects. By extracting oils and varnishes from the coal the objects could be painted and lacquered. All this took place in the early 18th century and now is just history but I remember Japan Ware as a child. I didn't appreciate it then and now that I do, I have to go to the National Museum of Wales in Cardiff to see it.

I'm grounded with a stomach bug and hating it! Once I've stopped feeling sick there are jobs to be done. I need to send images of my paintings to two galleries - one in Bath and one in London. I also need to get back to work. In the meantime I'm watching old sitcoms on TV.
Posted by Mary Jolley née Peckham No comments: Links to this post

High on a sandstone cliff, overlooking a large loop in the beautiful River Wye is the historic market town of Ross-on-Wye.

I pass by Ross-on-Wye fairly often on my way to see family in Gloucester but it's a few years since I
spent time there. The view from the road is always spectacular with the river running alongside the town and the surrounding countryside is breathtaking. So I was more than pleased to get a call from a gallery in Ross-on-Wye a couple of weeks ago interested in my work and asking me to exhibit there next year.

I buy most of my paint in Soho but white paint I need to get in litre tins and the only stockist is Atlantis in the east end of London. The crazy thing is that the paint is made in Cwmbran, 30 minutes drive from here and close to the village where I was born. Finally yesterday, after years of having to wait for the paint to arrive through the post from London, some clever negotiation on the part of a member of staff at Atlantis meant I was able to go and collect the paint from the factory. A small success but it will make life easier in the future.
It was a sentimental journey; I drove through streets I haven't seen since I was a teenager. On the way back I called at a fruit farm to buy damsons and by the end of the day I not only had my paint but freshly made pots of damson jam to store for the winter.
Posted by Mary Jolley née Peckham No comments: Links to this post 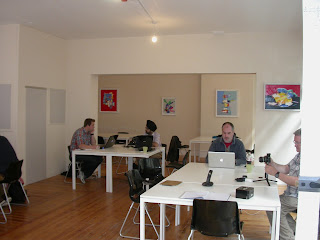 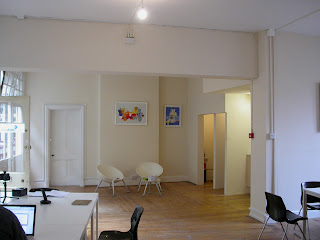 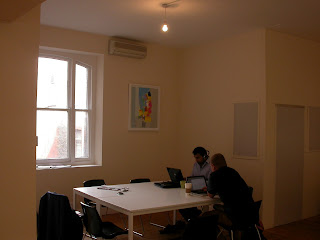 I have new neighbours across the Balcony from my studio. It's a co-working space based on a project in New York. People use the space to work, share ideas and arrange meetings. They pay a small daily sum. The wall space in the unit is impressive and when approached by the man who runs the project to hang some of my paintings there I agreed.

A week ago ITV Wales sent along cameras and a journalist to do an item on Indycube. It's showing on the TV in the next week or so. I will be watching with a critical eye - to see how the paintings look of course!
Posted by Mary Jolley née Peckham No comments: Links to this post

Explaining why I do what I do. 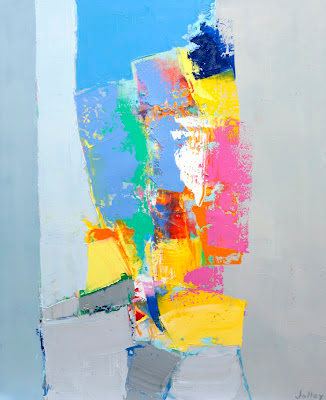 Fine and Mellow. Oil on canvas.

I have agreed to talk to a local Arts Group next Spring about my work and painting technique. One of the things they will want to know is - how do I know when a painting is finished? It may not be enough to say "I just do" and to try to convey the absolute certainty of this emotion. In a recent interview with Ian McEwan I heard the interviewer ask the same question of him in relation to his writing. She quoted the painter Mark Rothco who said a painting was finished when he became emotionally disengaged from it. Sadly he became emotionally disengaged with everything eventually, including life. But I know what he means.