There is always a tune going round in my brain prompted by some memory of a time and place which resonates only for me. It grows into something more substantial when the images become transposed onto canvas.
Darn that dream; 'Round midnight; All the things you are; Reasons to be cheerful; are just some of the many paintings that began in this way. The pictures have long been sold and belong to other people now.
I wonder what they see when they look at them?
Posted by Mary Jolley née Peckham No comments: Links to this post

Three paintings sold over the last two months but not enough to keep my balance in the black once the studio rent is paid and paint supplies replenished. When September comes I should look for new galleries. But I've been here before and I know that once I'm back in the studio and back at work I'll forget about it and just go on painting and hoping for the best.

Mixing up the genes

I think of myself as Welsh although it was my mother who was Welsh, my father was born in Wiltshire. I grew up believing that my great grandmother was French and there was always a whisper of a touch of Spanish somewhere. No-one really knew. But now I have two grandsons who are Welsh and German and two who are Welsh and Bosnian/Serbian. We're all Europeans now.

I was married in August but my husband is no longer here to raise a glass. He missed a lot of good things - four grandsons he would have adored and a house in France where he could have indulged in the best of Cahors wine. But he was a 'bon viveur' who couldn't see the point of denying pleasure for a few extra years on this planet. So he died young. I don't think he was prepared for that and I am left in a state of limbo with so many things unresolved.
But he was my biggest supporter when it came to painting and I still use the easel he bought me soon after we were married. If I'm looking for approval from him on how it's going, I think I have it. I'll raise my glass and settle for that.
Posted by Mary Jolley née Peckham No comments: Links to this post 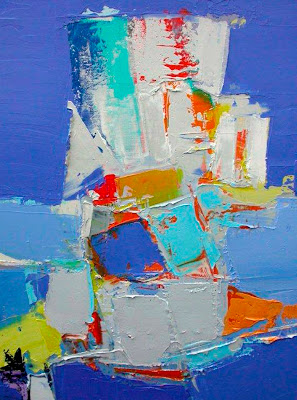 Beside the Sea. Oil on canvas

It's hard to go to work when the sun is shining. I want to soak up the heat and store images of summer for cold winter days.
Posted by Mary Jolley née Peckham No comments: Links to this post