The route from Pontypool Road Station to my home took me through Bluebell Wood.

Over the years this walk through the woods came to symbolise quiet contentment. I played there as a child, and later the many journeys I took through the wood often marked a milestone in my life.

No phone at home, I returned home from France, where I had been working as an au pair, to surprise my parents. I can still remember the excitement.

In the early hours of an Autumn morning, heavy with mist, we formed a small single file to walk through the wood to the station. My father helping to carry suitcases, my mother pushing our 10 week old son in a borrowed pram whilst clutching the hand of our 2 year old. The train to Newport was the first stage of a long journey which would end, later that day, in Helsinki. It would be a year before we returned.

As the boys grew up they came to know the wood well. Over time the single file down the path extended to include the dog, the cat and the cockatiel. They all became regular travellers with us on the train.

The wood is no longer there; houses stand where the bluebells flourished.
I have no reason to return. It would be painful. Instead I look at the bluebells in my front garden and remember. 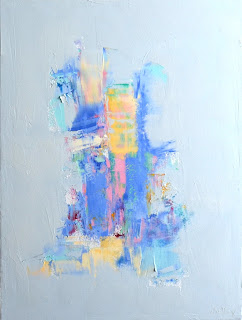 Long Ago and Far Away.  Oil on canvas.


The boys are back in town!
It's time for the bi-annual ritual with my sons so it's Friday night at the Principality Stadium soaking up the atmosphere of Wales vs. France with cold beer, warm feelings and the sweet taste of victory.
We fight the crowds in town on Saturday to re-visit favourite places and then it's a Balti celebration at the Paramount back in Penarth.
Sunday morning we eat Scottish kippers from Ashtons, a fish market to rival any in Marseille.
Later on I cook a classic Sunday roast before the goodbyes as my sons head off.
We're talking about Paris next year. 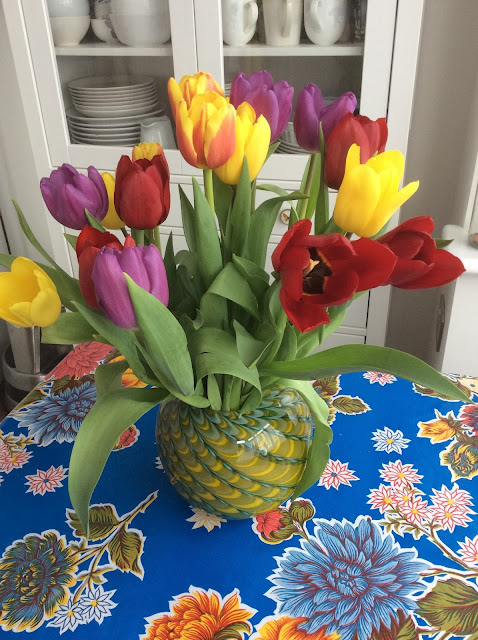 At the moment the tulips are the only visible sign of Spring so I keep gazing at them throughout the day. It's cold and unfriendly outside. Even during the brief moments when the sun breaks through there's no indication that it's anything more than just a big tease.
I feel guilty complaining about the cold weather when refugees in their thousands are camping in the most appalling conditions. Their situation is dire and it only seems to be getting worse.