Not a good day at work.

I was geared up to paint the walls of the studio this morning but a letter fom the Albany Gallery arrived reminding me that they need paintings for the Christmas show  In the end I would have been better off decorating I had such an abysmal day trying to get something reasonable on canvas. I'm paying for the long summer break. I'm going to have to push myself to go back to the studio tomorrow - it's so depressing.
On a cheerful note, someone spotted the photograph of me and my neighbour in Cardiff Life, at the opening of the Albany Summer show back in July. 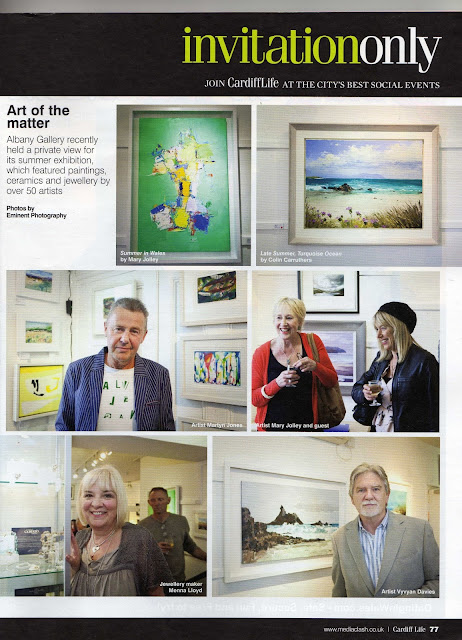 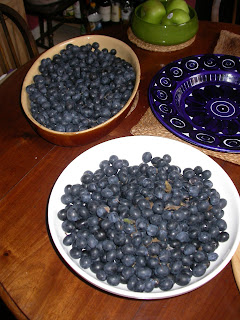 Bliss - I came across damsons in Penarth this morning and by this time tomorrow there will be jars of rich purple jam in store for winter. Monday I start back in the studio after the long summer break. I'm ready for work - lots of images in my mind, good ideas for paintings and plenty of new canvases waiting.
It's going to be a good week.
Posted by Mary Jolley née Peckham No comments: Links to this post

It took awhile to get home yesterday and the journey wasn't without drama. Taking a left turn into one of the roads in Penarth, the front wheel came off my car. I caused a traffic jam and got a lot of abuse from people thinking I had just parked in the middle of the road - as if? The police arrived in force - 5 of them along with two police vans. Groups of people gathered, attracted by the presence of the police and it took on the appearance of a major incident. It took two hours for the AA to sort it out and take the car to the garage. In the meantime I sat in the car listening to the radio - generally amused at being peered at. It was only when one man started to take photographs of me and my car against the backdrop of the police van that I intervened to ask him to stop.
The police were brilliant - the breakdown lorry too, giving me a lift home. I'm hopeful that I'll soon be reunited with my ancient Merc. I'm not giving up on it yet!
Posted by Mary Jolley née Peckham No comments: Links to this post